Research on material type
Prior to carrying out a detailed condition report of the cetacean skeletons, it is useful to have an understanding of the materials we are likely to encounter, in terms of structure and chemistry. This blog entry invites you to join us in learning about the composition of whale bone and oil.

Whale bone
(Cetacean) bone is comprised of a composite structure of both an inorganic matrix of mainly hydroxylapatite (a calcium phosphate mineral), providing strength and rigidity, as well as an organic protein ‘scaffolding’ of mainly collagen, facilitating growth and repair (O’Connor 2008, CCI 2010). Collagen is also the structural protein component in cartilage between the whale vertebrae and attached to the fins of both the Killer Whale and the Dolphin.

The internal structure of bone can be divided into compact and cancellous bone. In whales, load-bearing structures such as mandibles and upper limb bones (e.g. humerus, sternum) are largely composed of compact bone (Turner Walker 2012). This consists of lamella concentrically deposited around the longitudinal axis and is permeated by fluid carrying channels (O’Connor 2008). Cancellous (spongy) bone, with a highly porous angular network of trabeculae, is less stiff and thus found in whale ribs and vertebrae (Turner Walker 2012).

Whale oil
Whales not only carry a thick layer of fat (blubber) in the soft tissue of their body for heat insulation and as a food store while they are alive, but also hold large oil (lipid) reserves in their porous bones. Following maceration of the whale skeleton after death to remove the soft tissue, the bones retain a high lipid content (Higgs et. al 2010). Particularly bones with a spongy (porous) structure have a high capacity to hold oil-rich marrow.

Along the vertebral column, the lipid content is reduced, particularly in the thoracic vertebrae (~10-25%), yet greatly increases from the lumbar to the caudal vertebrae (~40-55%). The chest area (scapula, sternum and ribs) show a mid-range lipid content (~15-30%), with vertically orientated ribs being more heavily soaked lower down (Turner Walker 2012, Higgs et. al 2010).

Whale oil is largely composed of triglycerides (molecules of fatty acids attached to a glycerol molecule). In Arctic whales a higher proportion of unsaturated, versus saturated fatty acids make up the lipid. Unsaturated fatty acids (with double or triple carbon bonds causing chain kinks, preventing close packing (solidifying) of molecules), are more likely to be liquid (oil), versus solid (fat) at room temperature (Smith and March 2007). 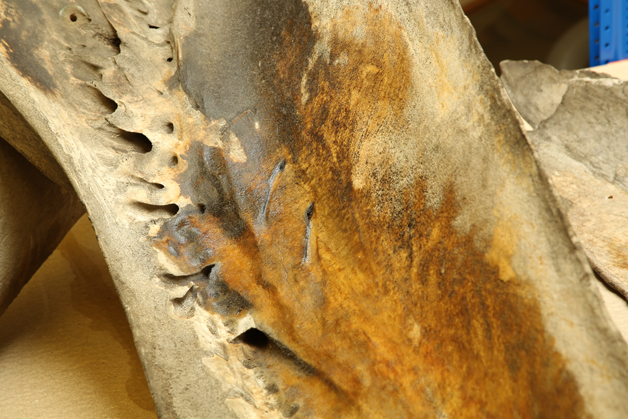 Please look out for our next blog entry, which will look at how cetacean bone and oil degrade. Can you imagine the treatment consequences?