Mechanical and chemical deterioration
Having familiarised ourselves with the composition of whale bone and oil, this blog entry allows us explore the deterioration of the various natural materials found on our cetacean specimens. This will aid accurate condition assessing (see images) and facilitate targeted conservation treatment.

Deterioration of whale bone
Bone is sensitive to environmental factors. Being hygroscopic, bone will absorb and release moisture with relative humidity fluctuations in the museum, (which due to the leaky roof have been in constant fluctuation).
Excess moisture may cause hydrolysis of the protein’s peptide linkages, causing swelling and structural weakening (due to a reduction in molecular weight) (Cassman et. al 2008). Moisture may also promote mould and micro-organism development, capable of degrading hydroxyapatite (a calcium phosphate mineral), through the release of acids.
Extreme dryness may lead to shrinkage of the bone, causing warping, cracking and delamination (O’Connor 2008). 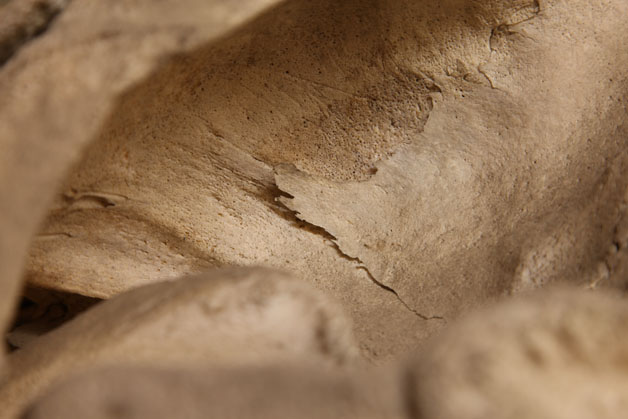 Variations in temperature also impact the stability of the bone, with excess heat leading to the destruction of protein and loss of moisture, while the combination of heat and moisture may damage the ossein (collagen forming organic matrix).

Bone is also light sensitive, thus exposure to visible and UV light (e.g. through the glass roof), will over time cause bleaching through oxidation. UV light also affects exposed proteins, e.g. comprising the skin (on phalanges), causing yellowing and friability, due to chain scissions.

Deterioration of whale oils
Oils are composed of triglycerides (esters of glycerol and long chain fatty acids). There are three main mechanisms by which oils chemically decompose or ‘rancidify’ (a term used for edible oils/fats): hydrolysis, bacterial action and oxidation. 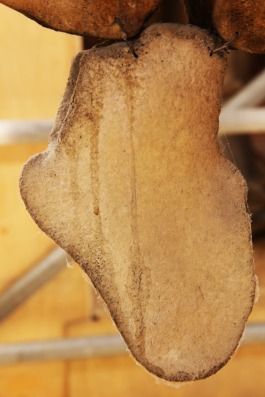 a) Hydrolysis: occurs when the oil’s ester groups are broken down by water (such as high humidity), or catalytic amounts of mineral acids*, into their component glycerol backbone and free fatty acid chains (Mills and White 1999). The process can lead to an alteration in the oil’s viscosity, colour and odour, such as when volatile carboxylic acid is released. Hydrolysed oil products form polar bonds with the whale bone tissue (hydroxyapatite), and can be seen as drips absorbed on the bone surface. It is thought the higher the free fatty acid content in whale oil, the darker the oil, ranging from pale yellow to dark brown (Turner-Walker, 2012).

c) Oxidation: occurs when oil is exposed to oxygen in the air, initiating a free radical process, leading to cross-linked films and/or bond breaking (particularly in unsaturated fatty acids with reactive double bonds) and the formation of degradation products (Miller 2013; Mills and White 1999).

Oxidation degradation products include hydroperoxides, free fatty acids, pungent carbonyls, aldehydes and volatile carbolic acid (phenol).
Cross-linking of oil compounds to form a rubbery solid, occurs when bonds form between neighbouring fatty acid chains via a free-radical process, to form a polymer network, characteristic of a ‘dried’ oil film (Gorkum 2005). The blackening of fatty areas is due to oxidation being an exothermic reaction, i.e. they burn.

The rate at which oxidation of oil occurs, depends on the availability of oxygen, light, temperature and humidity as well as any transition metals, all of which may act as pro-oxidants (Miller 2013).

Un-oxidised oil in the bulk of whale bones may wick to the surface via capillary action through the bone’s porous structure, allowing a thick, sticky, fully-oxidised oil film to accumulate on the bone surface. The exposed oil along with its acidic degradation products may not only attract dust, but also dissolve the bone mineral hydroxyapatite, reducing the bone rigidity. 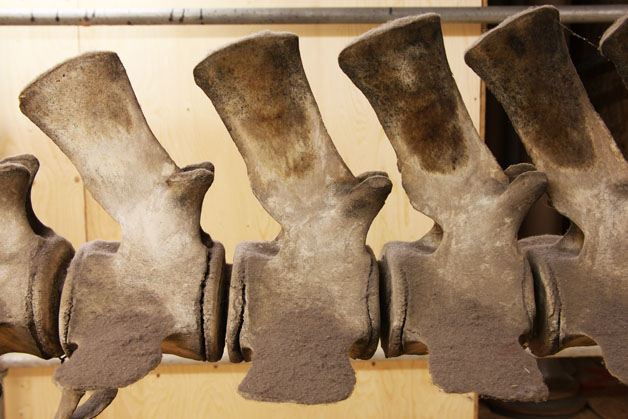 Once an oil film has hardened, oxygen diffusion and the resulting degradation process slows, sealing in un-oxidised and partially oxidised oil reserves (Turner-Walker 2012).
Can you predict our conservation dilemmas to come?

2 thoughts on “Not so- extra virgin whale oil”