Review of whale bone de-fleshing and de-greasing case studies
In this blog entry we briefly reflect on skeleton preparation techniques, to gain an insight into how our cetacean skeletons may have been initially prepared, what effect these methods may have had on the current condition and if lessons for treatment can be gained. Following this we present three case studies on how other institutions have attempted to degrease whale bones. Their success and relevance to our cetacean specimens may help to shape our treatment decisions. 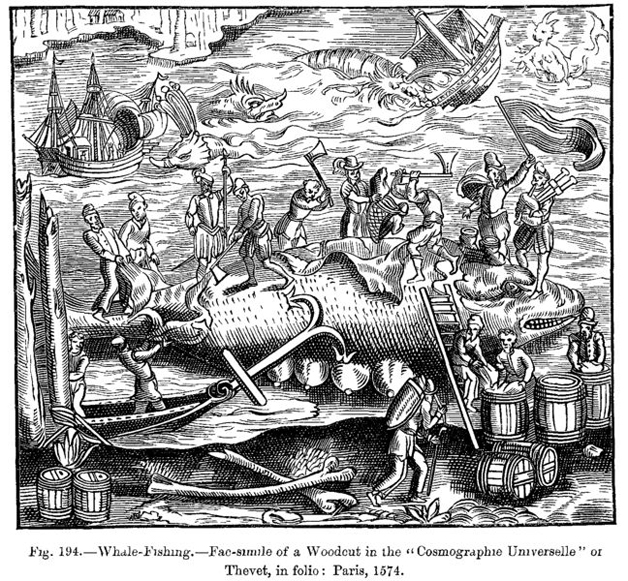 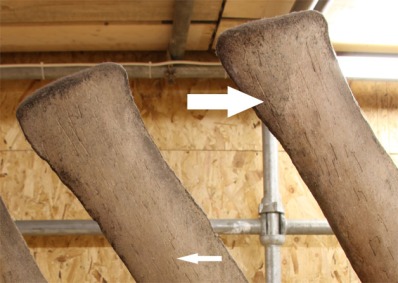 Excarnation
(de-fleshing)
We found two main methods historically employed to de-flesh skeletons for museum display or handling purposes. Our specimens vary considerably, in that some are more oil-rich than others, while the survival of cartilage on fins and vertebrae disks also differs. This would suggest that the specimens were prepared by different methods or individuals. De-fleshing involves first mechanically removing larger pieces of flesh, followed by methods including maceration or the use of dermestid beetles. 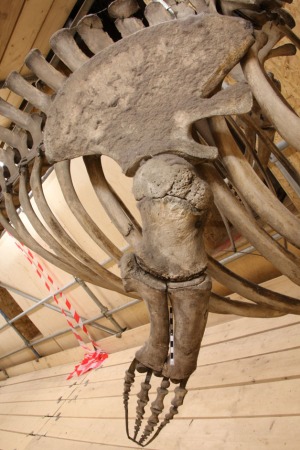 Warm water maceration
This technique involves placing whale skeleton components in (warm) water tanks (encouraging bacteria development) over several months, occasionally changing the water baths in an effort to clean and degrease the bones, aided by bacteria action (which break protein bonds by releasing proteases). While the Smithsonian Institution found this method to be effective to some extent (during the 1980s and ‘90s), they consequently found lipids accumulating and strongly adhering to the bone surface following maceration (Ososky 2012). Warm water maceration may be risky, as it can potentially dissolve cartilage and any unfused bone.

Dermestid beetles
Encasing the whale bones in a warm, humid ‘bug chamber’ with scavenging dermestid beetles (though considered a museum pest), used to be a popular practice at the Smithsonian Institution (True, 1892) and is still a common method for removing flesh from bones. The rapid cleaning technique is sometimes followed by immersion of the bones in an  ammonia solution (e.g. 3%), before drying the specimens (Ososky 2012). If timed right, it is possible to preserve the cartilage and ligaments with this method, as the beetles will consume these harder protein-rich areas last.

De-greasing methods
While researching how to de-grease our whales, we came across a number of treatment methods which have been tested and applied by other Natural History museums. Our review focuses on techniques using enzymes, various solvents and aqueous ammonia. 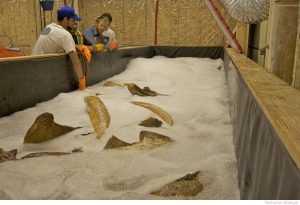 Enzymes
Research carried out by the Natural History Museum of Nantes in 2012, aimed to test the efficiency of enzymatic degreasing of whale bones (Balaenoptera physalus), using commercial lipase products e.g. Lipase DF15 (Poisson et al. 2012). These enzymes are designed to catalyse esterification* of free fatty acids, (mainly found to be oleic acid and palmitic acid), to essentially reverse the degradative hydrolysis reaction. *Esterification converts an acid (harmful to the bone) into a (less harmful) ester and water, by combination with an alcohol, e.g. ethanol (through a condensation reaction). After incubating bone samples for 72h however, the enzymatic degreasing achieved, was limited. While oils on the bone surface were efficiently solubilised, the enzyme did not penetrate the bone and thus did not facilitate a migration of oil from the core to the surface (Poisson et al. 2012). 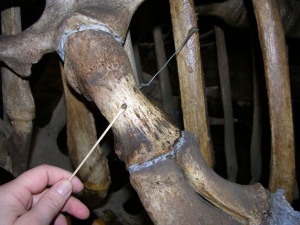 Organic solvents
Test-cleaning of oily historic whale skeletons at the University Museum of Bergen was carried out using paper poultices wetted with organic solvents in 2012 (Turner-Walker 2012). Intuitively oils were expected to be soluble in non-polar solvents (incl. cyclohexane, xylene, toluene and methyl chloride), these however proved ineffective. Instead, polar solvents (incl. acetone, isopropyl alcohol and ethanol) had an improved cleaning effect. This is explained by the transformation of unoxidised oils to oxidation degradation products and cross-linked oil films on the bone surfaces, which themselves are polar (Turner-Walker 2012).

Aqueous ammonia
Researchers at the University Museum of Bergen then proceeded to test clean whale bones using a 25% solution of ammonia, brushed onto the surface with water, before removing foam residues with a wet vacuum-cleaner. This method proved very successful at degreasing bone surfaces (Turner-Walker 2012). Ammonia, being an aqueous alkali, is capable of breaking ester molecule groups in fats into their glycerol and fatty acid elements, producing sodium or potassium salts (soluble soaps) via saponification (Mills and White 1999). The foam may be wiped from the surface, while excess ammonia off-gases and low-molecular ammonium salts are expected to leave the bone structure via sublimation (Turner-Walker 2012). 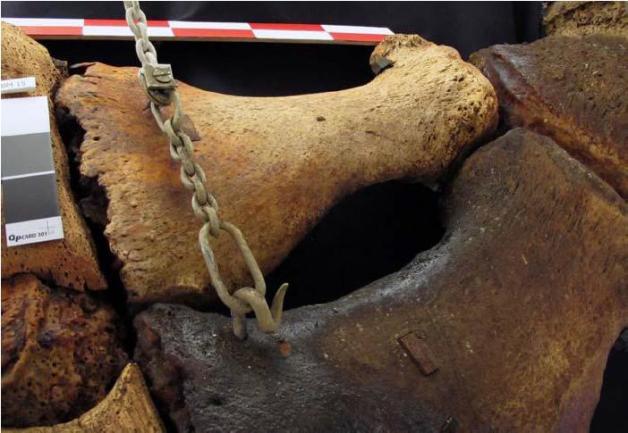 Please watch out for our next conservation blog entry in which we will present our treatment criteria and results of our own degreasing tests.

8 thoughts on “We are not alone and not the first!”